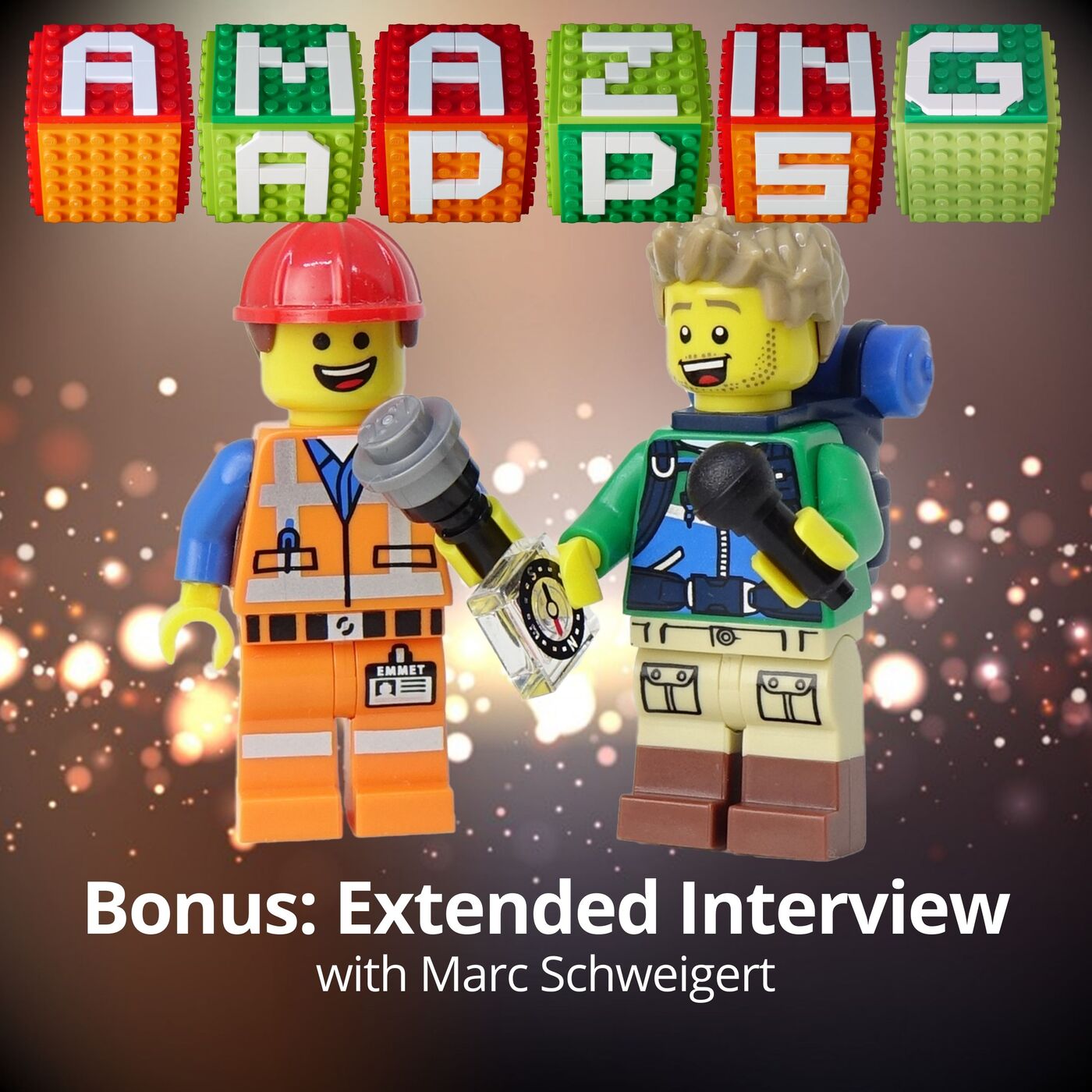 #83. Bonus extended interview with Marc Schweigert,  principal program manager on the Power Customer Advisory Team at Microsoft as we talk about Application Lifecycle Management (ALM) approaches suited to novices and citizen developers through to professional developers.

In this bonus extended interview, I ask Marc 10 rapid-fire "would you rather" questions:

Welcome to Amazing Applications, a podcast for Microsoft power platform and dynamics 365 application builders who want to make amazing applications that everyone will love.

Hi, I'm your host, Microsoft business applications MVP, Neil Benson. And my goal on this show is to help you slash your project budgets, reduce your delivery timelines, mitigate technical risks and create amazing agile Microsoft Dynamics 365 and power platform applications. This is a short bonus episode, picking up on my interview with Marc Schweigert, Microsoft principal program manager in the power platform customer advisory team PowerCAT. PowerCAT have a built an ALM accelerator for makers and just launched a new ALM accelerator for advanced makers, or, you know, developers, as you might call them. The ALM accelerator for advanced makers was released last week, after my interview with Marc, so make sure you check it out. Links are in the show notes at customery dot com slash zero three zero. Here's my rapid-fire session with Marc Schweigert. Marc, we've, we've covered a heap in almost an hour, I've got through three of my 25 questions. Thank you for that rallying cry for the community to come and help out to learn how to do this stuff in an opinionated, but very structured, very mature fashion. That's awesome. I think it's an amazing movement that we're building here. And I want everybody to get on board. Any final closing remarks, I'm going to put lots of links to lots of the resources you mentioned in our show notes. Any closing remarks and then I’ve got 10 rapid-fire questions for you

No, I mean, the closing remarks are just you know, once we're public, you know, get involved, like push us, we're not going to solve every problem immediately, right? But we're going to take a very agile approach to you know, triaging the backlog, getting what we can in and into our monthly releases and, and hopefully shape this in a direction that meets the needs of the community, not just what we've built for ourselves to start.

Great stuff. You're ready for the rapid-fire.

I would say Australian beer because I'm a homebrewer. And so I like wine. But uh, I love trying new beers.

Okay, this is for anybody who's Well, you know, watching the video because this is just a podcast. I'm holding up. This is Helios. This is a red rye from my local brewery. It's awesome. They're just around the corner. They make some great beers. I'm on board with that one.

Second Rapid Fire question. Would you rather use Scrum or dynamics Sure Step.

Neither. I if I had to pick one, I'd say Scrum. But you know, I'm, I'm a big believer that like your methodology starts from something but ultimately becomes yours. Because methodologies that work are a reflection of team culture.

Yep, absolutely. I take Scrum, some proven practices. And that becomes our process for the team that we've got. For the next customer. It'll be a different set of proven practices. They'll drag into Scrum. And it's a framework. It's a scaffolding the build stuff within so cool.

Would you rather include comments in your code? Or write an ambiguous code?

Okay. Would you rather call it a table or an entity?

Well, it's called a table now so, I guess. I guess. I'll call it a table. You know, I just what I'd rather everybody calls it the same thing.

Okay, tow the party line on that one.

Would you rather ship managed or unmanaged into production?

Managed. Yeah. Yeah. I thought I almost thought I said unmanaged. But managed.

Would you rather give users a choices field or a lookup?

It depends, but I'd say choices to start.

Okay. I agree. We're just debating that on Twitter the other day. They support translations, they ship in solutions nicely, easily. I like the user interface for choices, selections, a little bit cleaner than a lookup. The argument for lookups is always well, the business wants to change their data, right? have different different options available.

But if you've got good ALM processes, changing that is not as difficult as you think.

Right. Exactly. And actually changing the records in your lookup can't be shipped so easily in a solution. So ALMs harder with a lookup?

Would you rather automate something with a flow or a logic app?

Depends on the user and the scenario but start with a flow and grow to a logic app if necessary.

Okay? Would you rather have one instance, per developer or a shared development instance,

I would much rather have one instance per developer. I'm a big believer in developer isolation.

I walked into a Microsoft consulting services engagement, and we had nine development servers. And this is way back in CRM 2011. So they were VMs. But what why we've got so many servers, a lesson I learned in developer isolation,

Do you think that's an ALM maturities? Kind of stage thing?

Yeah, I think that's another sign of healthy ALM if I can go from a scratch environment, up to the last known good build and development. And if that takes 30 minutes, that's, that's a good sign.

With the other one, would you rather use Azure DevOps or GitHub?

Right, I think, I don't know. I don't want to say the writing's on the wall, but I can see a lot of Microsoft resources pouring into GitHub. So

Yeah, I mean, the reality is, there's still a lot that you can do in Azure DevOps that you can't do and GitHub today. And, you know, the, the, there's a lot of work going on to be able to get to a place where customers can, if they, if they choose, move to GitHub and do all the same things that you can do in Azure DevOps. Part of our plan is to support both Azure DevOps and GitHub in the ALM accelerator. Today, we only support Azure DevOps, one of the things that we depend on heavily in our pipelines, our templates in the EML, and get that doesn't. GitHub doesn't have an equivalent. And so it's kind of challenging for us to recreate what we've done in our accelerator and GitHub today. There are other things as well. But we're tracking all that stuff. And it is our goal to be able to support both DevOps and GitHub.

Yeah, most of the agile teams that I work with are looking at product backlogs, Product Backlog items, managing boards, they still love using Azure DevOps for that. And I haven't even explored GitHub to see if there's equivalents or emerging capabilities there yet. I'm sure they will in the fullness of time, but Azure DevOps for most of my crew as well. Would you rather include a Canvas app or a PCF control in within a Model-Driven app?

I would say Canvas At first, the whole point is to write less code if if their code is unnecessary. And so Canvas first PCF second,

okay, good stuff. Rapid Fire. We nailed it. Marc. It's been a pleasure. Can I just tell you one quick story, because there's another good friend of mine is Mark with a C, at Microsoft as well. And it's not a name, spelling I come across very often, but there was a Marc who walked into Starbucks, and he was fed up of they misspelled his name, every time when he ordered his coffee, they would write it on the cup. So he said, I'm Marc with a C says, his coffee come out the other end Cark. C A R K

That's never happened to me, but I'm sure it eventually will.

Alright, well, Marc, it's it's been a pleasure to have you on the Amazing Applications podcast. Thanks very much for joining us.

Thanks for having me.

Thanks. Once again, Marc. These bonus episodes aren't promoted on social media. So if you're listening to this, you're probably already following the amazing applications podcast. If you are, thanks for joining me again, I really appreciate you. If this is your first time listening or you're not a subscriber, then it's not too late. The doors close at midnight on the 31st of February and then the price doubles. But you can become a subscriber for free right now by clicking follow or subscribe on your podcast player. We've got lots more great interviews and some solo shows coming up. We'd love to have you join us.

Until then, keep sprinting. Bye for now.