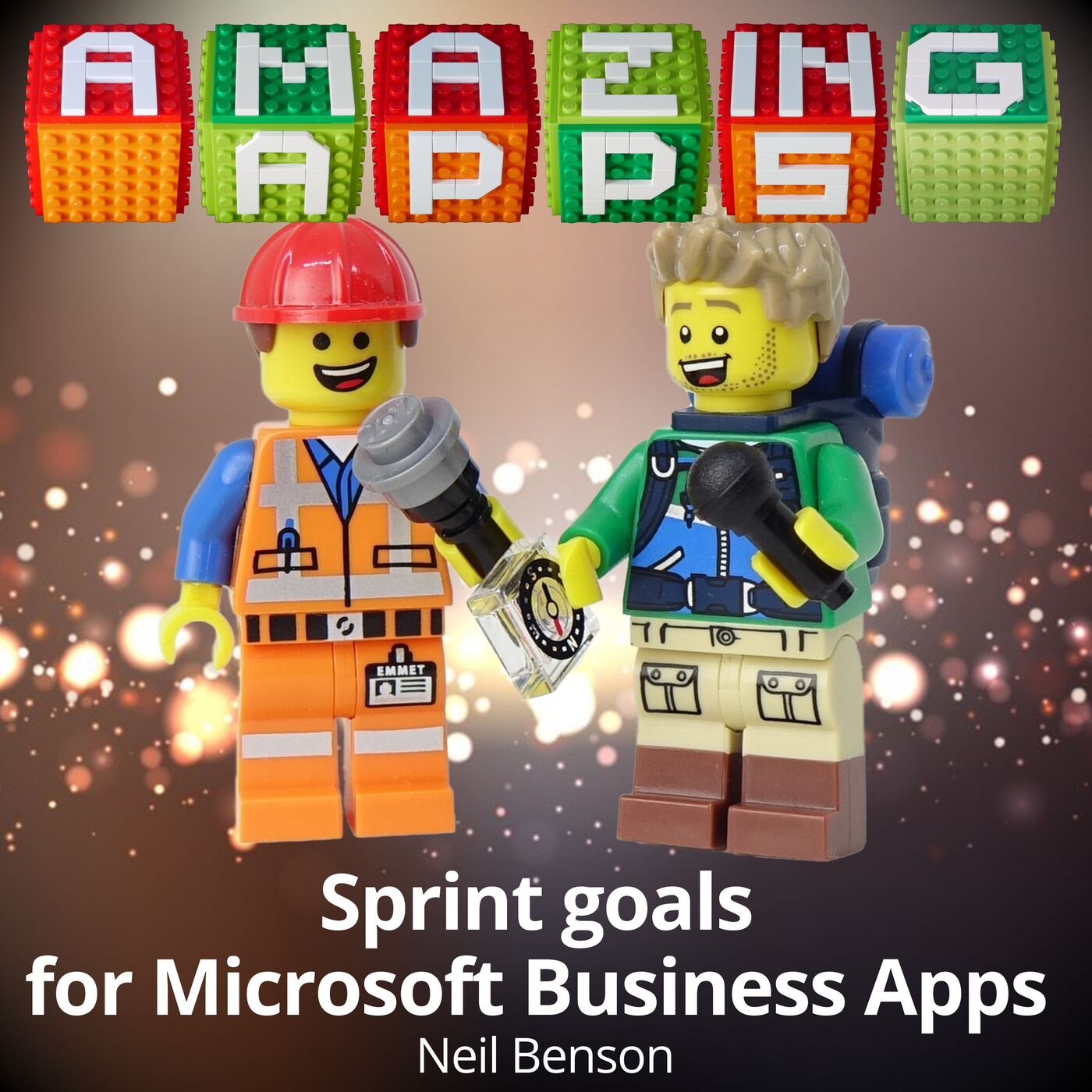 This episode includes examples of sprint goals for Dynamics 365 and Power Apps projects and answers sprint goal questions like:

What sprint goal is your team working on? Let me know on LinkedIn.

Neil Benson: [00:00:00] If you can write your sprint goal in the subject line of the sprint review invitation to your stakeholders, and they stampede to accept your invite and beat down the door at sprint review, that's a great sprint goal.

This is episode 123, and we're talking about how to use sprint goals for your business applications. You'll find show notes on a transcript at https://AmazingApps.Show/123.

I have to confess, I struggled when I started using Scrum for my Dynamics CRM projects, back in 2008. I struggled using sprint goals. Over time, since then, I've learned that my team's work so much better, where we have good sprint goals and we can build better business applications when we use sprint goals.

So let's start with why sprint goals are a good idea in the first place. What's the benefit for having a good sprint goal?

The sprint goal gives the team a unifying focus without being prescriptive about exactly how we're gonna get there. It gives them a target, but our plan is flexible because designs will emerge as we begin to build increments. The sprint goal describes the value that we as developers are committed to delivering within the next couple of weeks.

[00:02:00] Sprint goals give our scrum team an excuse to collaborate. When there is a sprint goal that the team is working on, developers will be working together on sprint backlog items to get them done.

If you don't have a sprint goal, or you have a sprint goal with lots of sub goals and sub goals, you know, have conjunctions with and this and, and that, or you get commas or semicolons or a set of bullet pointed sprint goals with story IDs in them, then that's a bad sign.

Your scrum team might be cooperating during the sprint without actually collaborating. Cooperating means that developers are each doing their own work. And try not to get in the way of anyone else. That's not really collaboration at all. That's the difference between everyone driving to work on their own, compared to sharing a bus ride together. Are you all on the same bus?

Some product owners even have a sprint goal in mind for all the future sprints we've got planned. Those plans could change at any time. They're not set in stone, but they form a roadmap for our application.

I don't like to write technical sprint goals that require Power Platform knowledge to understand.

If you can write your sprint goal in the subject line of the sprint review invitation to your stakeholders, and they stampede to accept your invite and beat down the door at sprint review, that's a great sprint goal.

A good sprint goal has a clear link to the product goal. The product goal is a medium or long term goal for our application. For example, it's the theme of our next production release.

You can totally take one feature- or epic-sized requirement from your product backlog and focus on it in this sprint. Choosing one feature makes a great foundation for a sprint goal. It just needs to be wordsmithed in such a way that it's valuable for our stakeholders and meaningful for our team.

In that portal authentication example, the team might not be able to meet all the requirements of that feature within one sprint. Perhaps including Twitter and LinkedIn authentication were too much to include. Or two-factor authentication is needed as well, but it'll have to be left on the product backlog until a later sprint.

That might involve stories related to integrating Field Service with Business Central, searching for inventory and being able to return the distance from the customer in those search results. And it might involve building a feature to reserve inventory from a bin for a few hours. That's gonna take most of the team's capacity this sprint, leaving them with just a couple of unrelated user stories as sprint backlog items that relate to different features.

Here are some ways I love to use the sprint goal.

Instead, after sprint planning, we can communicate our commitment to our stakeholders by letting them know the sprint goal that we have agreed, and that they can review that at our next sprint review. For example, at the sprint review in two weeks, you'll be able to review our progress towards generating documents triggered by events captured in Dynamics 365. Or, our sprint goal for sprint 17 is enable contractors to apply online for a road closure permit and have it approved within two hours. Join us next Wednesday to assess our progress and provide your feedback on this feature and what we should work on next.

So those are some examples of how we can use sprint goals to communicate with our stakeholders.

The second is to give our developers focus during our daily scrums and in their daily work.

Our sprint goal is road closure permits in two hours. Here's what I achieved yesterday that contributed to the sprint [00:08:00] goal. And here's what I'm planning to achieve today. That's the kind of focus we can have in our daily scrums.

When we finish a sprint backlog item, and we're wondering which one to pick up next, we can check our sprint goal. Which of the to-do items contributes most towards the sprint goal? That's the one I'm gonna pick up and work on next.

The sprint review is an opportunity for the product owner to ask the stakeholders for their ideas, for goals for the next sprint or two. This is their chance to lobby for what they want our application to be able to do for them.

Let's close out this episode with a couple of sprint goal questions that commonly come up.

Emily: " Can we have more than one sprint goal?"

Neil Benson: Short answer is no.

I worked with a team that was building an application used by two divisions in an organization. And each division's vice president wanted us to work on a sprint goal, focused on their division. We couldn't do it. You can't have two product owners and you shouldn't have two sprint goals.

A better option would be to have two small teams working on [00:10:00] two product backlogs, each with a product owner representing one division's stakeholders, and each with separate sprint goals every sprint. And then you would use some scaling practices to coordinate the work of the two teams that are both working within a single environment.

Nicholas: " How do we create a sprint goal when we have lots of different, unrelated, high priority items?"

An approach like Kanban might be a better way of managing your work, if you wanna use an agile approach.

I think Scrum is great when you have a team building a complex business application, but not for handling bugs and enhancements in a support environment that maintains a lot of applications or development group building a portfolio of small unrelated business apps.

And the last frequently asked question about sprint goals is:

Don: " How do you determine the sprint goal when each sprint may have different sets of stories that is not related to one specific enhancement or feature?

Neil Benson: I'm going to assume that you have a scrum team building a single business application. And unlike the situation in the previous question, you're not just a group of developers working on a set of completely unrelated items.

Instead you have a product backlog for one application, but the high priority items near the top of it are somewhat unrelated. In this situation, I'd encourage you to work with your product owner to take the highest priority item and make that one, the focus of the sprint by crafting a sprint goal around it.

Scan your eyes further down the backlog and find any other backlog items related to the same module, the same component, or feature, and see if there's value on working on all those items together, [00:12:00] as a team, while working on that one, really high value item.

If together those items make up at least half your developer's capacity, maybe even 70 or 80% ideally, then I'd try that.

It's okay for some items in the sprint backlog to be unrelated to your sprint goal. Not too many, though. If less than half the team's capacity is spent collaborating on the sprint goal, then that's something I'd encourage you to examine in your next retrospective.

Okay. That's it for episode 123 on sprint goals for Dynamics 365 and Power Platform applications. I'd love to hear your sprint goals and give you some feedback or answer your questions. You can ask them on LinkedIn, wherever you see this episode posted.

Until next time, keep sprinting.